There was something that we knew well even when we were unaware of the existence of a form that was defined as guitar music. An electronic fragment of emotion that almost leaked into our bloodstream from an object that broke in the middle of a song could turn into a sociological weapon to mobilize audiences. A style of those that could declare their own republic became the god of those who could not. Steve Vai, one of the most prominent signatures, found the man who spoke of his own utopian republic in a corner as successful as to become his producer, and reminded us his name again: Andy Timmons, the writer of signature lyrics…

Timmons, an American guitarist born in 1963, had reached a point with his technique and legendary style that many of his predecessors or contemporaries could not. Although he played in a variety of styles from blues to country, fusion to jazz and rock, the virtuosity that was revealed so intensely every time no matter what he played made him one of the best of this century. The pop-metal band Danger Danger became an important milestone in his career. Even though the band broke up after touring with the likes of famous bands and musicians such as Kiss and Alice Cooper, Timmons continued his solo career, and shared the same stage on G3 tours with great musicians such as Steve Vai and Joe Satriani. He also had the chance to play with the likes of Ted Nugent, Steve Morse, Eric Johnson, and Mike Stern. Before all these experiences, he studied classical guitar for two years but realized he wanted to continue his career with jazz guitar. In the following period he signed with Epic Records (1988), which would lead to his wide recognition as the lead guitarist of the band Danger Danger. A single sentence underlined in his interviews always stood out: “I keep on learning!”

But did we really know what made the real Andy Timmons, other than his very successful résumé? If you ask me, it was the emotion he conveyed in a lean and pure manner that we have not seen in anyone else. In this context, it would be the most honest thing we can do to reveal him as a poet much more than a musician. Analyzing his playing style, which consists solely of sentences, means setting off on a journey into the wholesomeness of meaning among the lines of a poem. What Angelopoulos is to cinema, and Chopin to classical music, Andy Timmons is that and more to the world of guitar. However, apart from this lyrical signature, we also come across moments when he stands apart with his intensely passionate sentences. His “Resolution” album has some of the best examples of this passion. “The Prayer / The Answer” resembles a fairytale conceived for the listeners to create their own Wonderland. In songs like “Beware Dark Days”, and “Ghost Of You”, we see Timmons’ signature lyrics as well as a serious guitar technique. 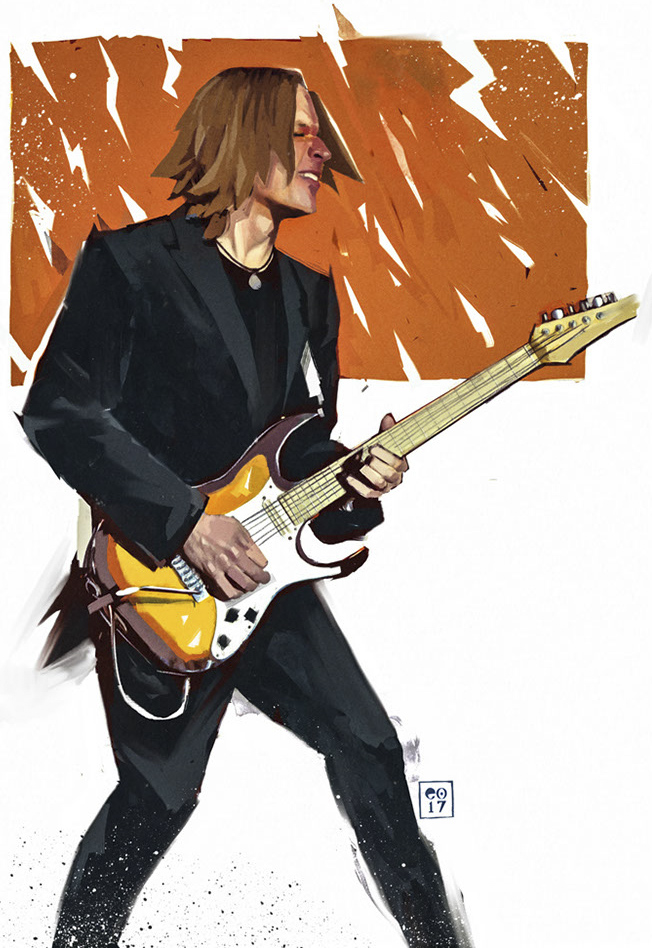 As Timmons’ lyrics take us through a wide range of emotions amid this quality sound that he creates, we encounter the lines of another poem in his narrative every time we listen to them. “September” always presents the lines in a very clear and pure manner, just like Orhan Veli’s “Ayrılış” (Departure). “Cry For You” is reminiscent of Kaptan’s lines in terms of tension, rather like the tune of “Ben Sana Mecburum” (You are my Must). “A Night To Remember” recalls Edgar Allan Poe’s poems, as a scary story drags you the brink of hard-to-believe pleasures, House of Usher suddenly appears in the middle of a solo. The “healing effect” of “Resolution”, like Füruzan’s lines, arises from the ghettoes of a sarcastic sadness.

While instrumental electric guitar music and blues elements feed the structure of the lines, he uses the hereditary characteristics of Satriani and the intensively processed melody as seen in Steve Vai. The instrumental electric guitar albums by Greg Howe, Guthrie Govan, and Marco Sfogoli that we later started to see, combined with the blues elements that exist in the codes of the Texas-born Timmons, have also led to an eclectic narrative. While they are inspired by the complex structure of Vai, they also display great resemblance with Satriani in terms of melodic blues lines. In examining the forms of his compositions, we can see that he has progressed with a planned structure just like classical music composers, and in fact for this reason, elements such as measure and rhyme, as a kind of reflection of poetry, appear in the narrative concern. (See a, b, a.)

Without knowing how many guitarists with such a powerful poetic narrative we can encounter, it would not be an exaggeration to say that Timmons is a virtuoso of originality, and in Vai’s words, tones. As witness to so many narratives that we have heard in person and with a lean style, and on behalf of the guitar that Ibanez produced in his name, and his own amplifiers, I would like to say this: “Timmons was the happiness that a jam session with a 58 model Fender Strat and an old Marshall amplifier gave us; I wish we could love him for this alone...”