The Photographer That Bends Istanbul In His Images.

To start, please tell us a little bit about yourself. How did your photography adventure begin? How long have you been interested in and working with photography?

I was born in 1972 in Ankara where I spent most of my early years. I was about to start elementary school when we moved to Alanya. I returned to Ankara to attend Bilkent University Department of Tourism Management but I later dropped out because I realized that it was not my dream. In 2000, I moved to Istanbul to pursue my childhood dream of studying and working in fine arts such as graphic design, cinema and animation.  From 2005, I worked for leading post-production agencies like Sinefekt and Makinefx but I quit the industry with a radical decision in 2008, thinking that it was very in efficient. As the character I created gained worldwide recognition, I simultaneously starting improving myself in photography. I then decided to study photography in an academic setting, and enrolled in Mimar Sinan Fine Arts University Department of Photography in 2012. 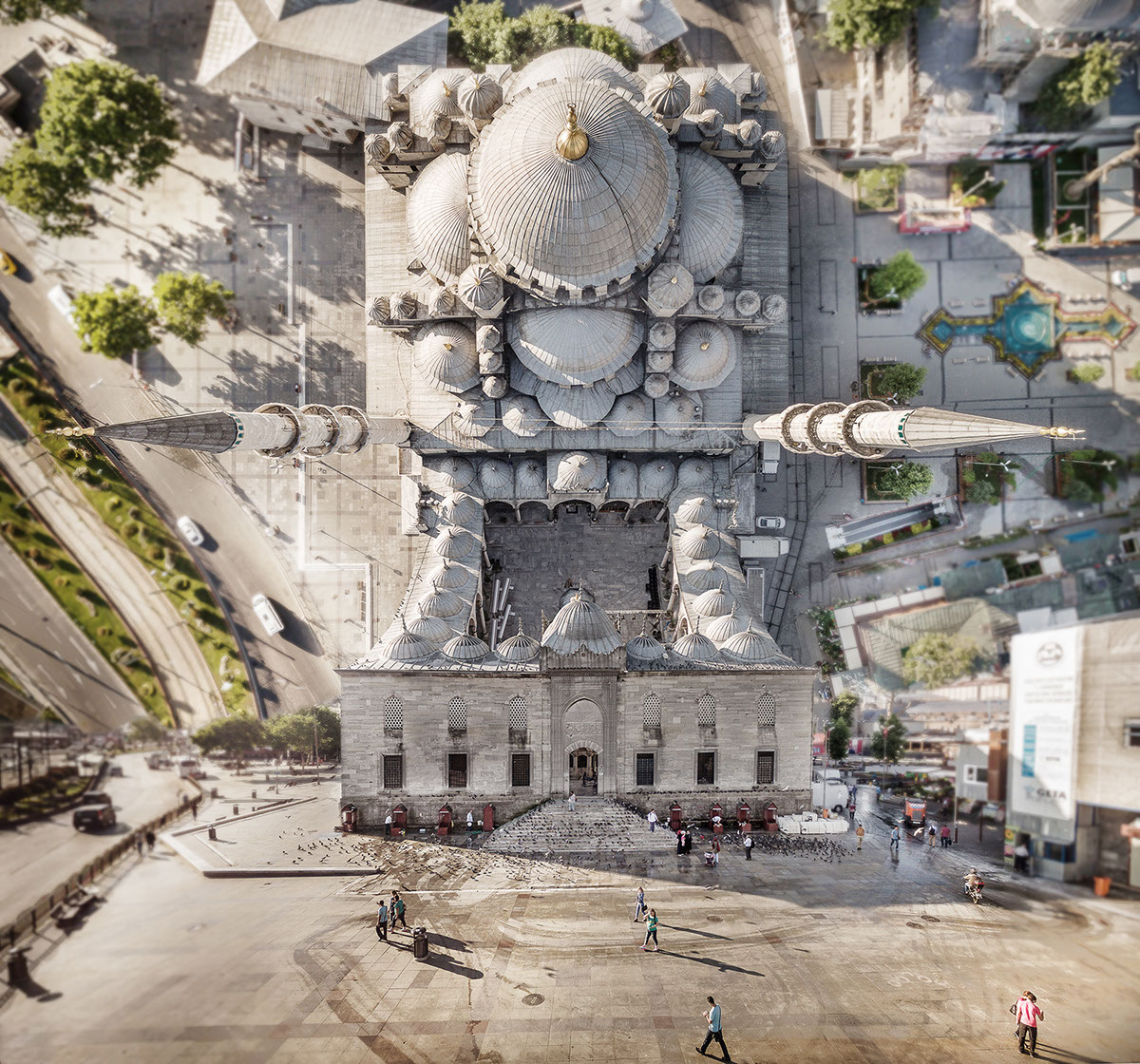 Did the idea of visually bending a city, Istanbul came about as a experiment or was it a calculated work considered for a long time?

When I started to focus on visual effects and animation in 2003-2004, the idea that surreal spaces that I dreamed of and envisioned as I child could be realized slowly began to take shape on my mind. I spent my childhood and teenage years reading science fiction writers such as Isaac Asimov ve H.G., and Science and Technology magazines. These books made me question topics like wormholes, black holes, parallel universes, gravitation, bending of time and space, etc. It was probably 2006; I was reading Michio Kaku’s book “Hyperspace” where he gave examples from Edwin Abbot’s book “Flatland: A Romance of Many Dimensions”. I was very impressed by how a book written in 1884 explained the way dimensions are interlinked and the challenges of perceiving interdimensional transitions. The way the book explored the concept of interdimensional transitions and the effort to understand third dimension while in second dimension had matched the way I questioned third dimension.  The protagonist of “Flatland” saw the “square” as a “sphere” coming from three-dimensional space, as a “square” when it would be raised to third dimension for perception, and looked at the two-dimensional place he lived for the first time from three-dimensional space. That was when the idea of bending space in a photograph fused with the thought of I can look at Istanbul with this logic. The name of the book that overlapped so much with my project was ironically very apt for my work as well.

When we get angry, we may want to damage an object; in this sense bending is sort of like crushing a piece of paper in our hand. Is there some anger or any other emotion toward the city that lies behind your desire to bend Istanbul? What were the emotions that led to this project?

Istanbul because it is the city where I live. As a matter of fact, what I aim with this series has more to do with creating the perception of textures and perspectives, and the places in my dreams rather than just a sensitivity for the city I live in.

As you make as see the city from another perspective you also add another dimension to the use of drones. Which stages did these images go through from the very beginning to the final presentation?

Before moving on to the shooting stage, I spent nearly two months planning. I created cities in 3D. I rendered thousands of shots by placing virtual cameras. Before shooting the images I was able to plan every single detail from the spots where the photos would be taken to the inclinations I wanted and where I would link them. In this manner, you solve every detail for the shoot and do not need to manipulate. My calculations were so precise that I could shoot on film and go straight into the dark room to print.

What are your sources of inspiration? What are other art/design branches that reinforced the idea of a city consisting of surreal architectural structures?

I draw inspiration from science fiction novels in particular.

It would be impossible not to remember “Inception”, the movie when we see these images. So, which names come to your mind when we speak about cinema, music, and arts?

Since I have worked in visual effects, I had already seen experiments on bending spaces in 3D programs. However that scene in Inception was so great that it left its mark on everyone’s mind. When I saw the first experiments in 2005 I believe, I immediately remembered my dreams but I never thought about doing it in 3D.  As a fan of science fiction, I like all of Christopher Nolan’s films. And I try to follow director Michel Gondry as much as I can.