Imagine a journey starting from the sounds you create with your breath and reaching the breath that is your existence. Now close your eyes and listen to the story of a man who aspires to play on the best stages of the world and who wishes the same for all his colleagues. Or better yet, take a “look” inside yourself through his eyes as you listen to him.

It is quite possible that our ontological goals, which have become a rhetoric for all of us have come together as one for him because this attitude that we can only define as a “look” other than his musical career brings with it the definition of a true mission: “I have come to find it!” and adds: “There was something I needed to do and here I am now!”

Since the day he became aware of his own journey, the artist has been mapping a route with his fellow clarinet accompanying him, lip to lip as he puts it, while emphasizing that this is an infinite state of traveling. His debut clarinet album “Bakış” (Look), dedicated to his father, features two titles called “Babam” (My Father) and “Bakış” that he wrote and “Ay Işığı” (Moonlight), written by Hüsnü Şenlendirici, who Demirdöğmez sees as his older brother.

Apart from playing his own interpretation of songs, the artist has also been composing pieces that combine different genres from Turkish music to blues, jazz and funk. His comments about future projects give us clues that we should expect surprises. At the time of our talk, Demirdöğmez has just recorded his second single “IMP” which will be release by the time we go into print.

How did you embark on this journey? As far as I know, your story is different than what we are used to hearing.

While I was studying another subject in Eskişehir, I discovered clarinet one night in Gemlik through a friend who is a local. I quit the same night as I wrote on the album. Then I met Süleyman Örs, who became my instructor, in Mersin and continued. Yes, it is rather different because choosing another life after 23 is not something that everyone can be comfortable with. I just wanted to play clarinet. After some training, I decided to attend the conservatory and I was certain that they would accept me but I wanted to try anyway. I finally got in!

Was there an idea for an album?

No, there was not. Event though I wrote some compositions during the conservatory years, there was no such idea and I just wanted to play my own music. And I did not make this album just for the sake of it but I was trying to carve a way for myself, that's all.

Is there a style that you define as your own?

I have a style that I define as my own “composition”. I think the most distinguishing feature is what it evokes in you because I know where the song takes me but what really shapes it is how you feel. So your comments are very important to me.

Your song “Babam” from the album created a lot of buzz…

We lost my father in July 2016. It was actually a turning point but I could only realize that a few months later when I recovered a bit. Composing “Babam” was transformational and I did not want to play with anyone. I had worked with and accompanied different artists for years but now I only wanted to make my own music. In this process I took a new path, started teaching and opened my own school. Meanwhile, I recorded “Babam” as a small melody with clarinet and filled the gaps with the piano. Then I found the opportunity to have Hüsnü Şenlendirici listen to my song. If I had a dream about it, I would probably see Hüsnü Şenlendirici playing my song with his clarinet but a miracle happened. He played my song on the piano and I accompanied him with my clarinet. I will never forget that night!

How did you first meet Hüsnü Şenlendirici?

My graduation thesis at the conservatory was on the life of Mustafa Kandıralı and I wanted to speak with some of the best clarinetists in Turkey. Hüsnü Şenlendirici has always been my idol. I had contacted him through his manager and he kindly accepted to meet me. When he asked me, “Do you want the short version or the long story?”, all I could say was “Tell me until the morning…” He said Mustafa Kandıralı was the Atatürk of clarinetists, I never forget that. I was going to all concerts of Hüsnü Şenlendirici, always listening from the front row without blinking my eyes ... I occasionally ran into him. One day, when he invited us to his house, he listened to my composition and played it and the next day he sent me that legendary message saying that he would give me one of his songs for my album. (His eyes fill up.) The name of the album also developed thanks to him. When he listened to my song “Nefes” (Breath), he said, "I give concerts all around the world, but I have never seen someone look at me the way you do.” At that moment, anyone, including me, could have been that look, which eventually became the title of the album.

The most different thing I heard from is that you have the same wish for all musicians of the world...

Yes, I wish for all of us to play on the world’s best stages.Who knows maybe one day, twenty clarinetists will come together on a huge stage and create something great. Why not? 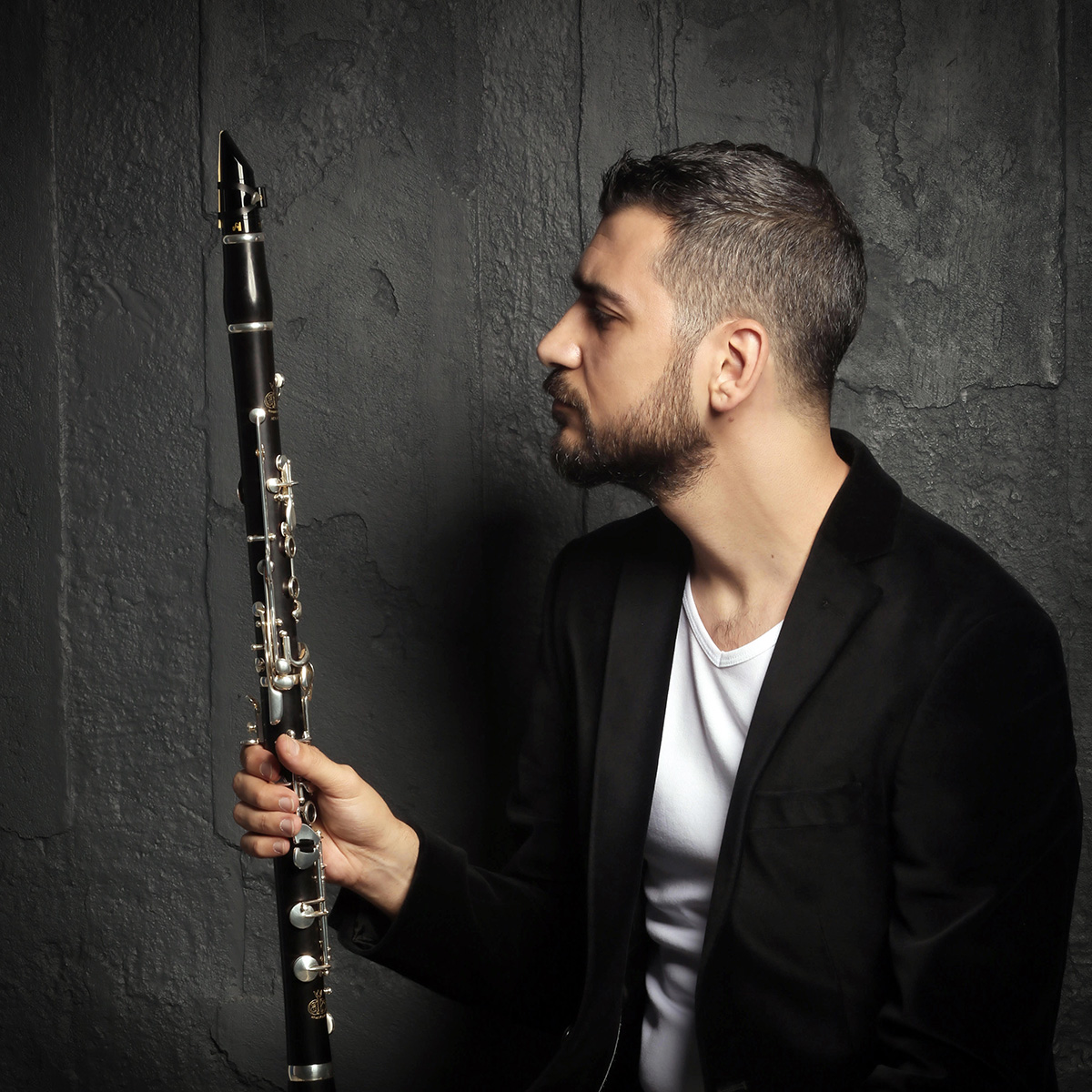 Is there a stage you can call the most special one you have ever played?

Palmiye Wedding Hall in Mersin. I am serious! Because it was my first stage and I had gone to many weddings there but had to come out empty handed because they did not let me play. My mother would ask every day, “Son, did they let you play today?” and she would get very upset. You know, I believe every musician should experience this, at least once. And there is also this… I was very happy wherever I could play the clarinet. It can be on the street or in a big hall, it does not matter. When you do it with love, it's the best stage in the world ... Then I gave many concerts in other countries and cities. I played in Sydney, Australia, Targovi, Azerbaijan, Paddington, London, Kuwait and Jeddah, but I will never forget that wedding hall.

What were the most important dynamics that formed today’s Demirdöğmez signature as you built your musical identity?

I will be frank. As a conservatory graduate, I must say that these things work exactly in some kind of master-apprentice relationship. I just wanted to play the clarinet. If you do not want to be an academic, you do not have to attend the conservatory. If you want to play together with a master, take part in other projects and do this job for the sake of music alone, then such factors form your identity I guess.

Are there any musicians you have always dreamed of playing together?

This is a big question because there are musicians I greatly admire more than I want to play together. Hüsnü Senlendirici has always been my idol. I like Burhan Öçal too and admire his vision. There is also Martin Fröst, even though our styles are miles apart. I have been able to work with Levent Altındağ for only an hour but I can say that it was the most memorable hour of my life. When I left, the tone of my clarinet had changed. He affected my outlook on life. He got me a new diploma in an hour.

If you had to evaluate your first album, how would you rate it?

I finished the first album in my head the day I played in the studio and started thinking “What’s next?” As soon as the first one was released, I decided to go into the studio for the second album. It may seem like a very short process but believe me it is very long. I have always lived dreaming of my own music. So I want to start working as early as possible but I also want to ensure that every tiny detail feels right. The sound of my album “Bakış” satisfied my but the next single had to have a completely different sound. And perhaps I had to take some risks. It is a single song and in a very different format... While arranging it, no matter what kind of equipment I play with, I always somehow draw myself out and frankly I have no intention of changing it. The sound of the new single is a style I am not really used to but at the same time it makes me feel good. There is a partition that I listen to a lot but I never impose the clarinet on it. I also trust the album “Bakış” because if it had been my second, maybe I would not be speaking so clearly. Especially when people played and shared my compositions on social media before the release of the album I thought, “ok, so I am creating melodies that reach them” and started to progress. No matter what I produce, no matter who they appeal to, I am certain that something uniquely me will emerge again.

I felt something close to the sound of Ibrahim Maalouf and Mark Eliyahu in your second album. What do you think?

They are both people I look up to when I had to make important decisions. The performances of Ibrahim Maalouf that I have watched have a sound and ambiance of which I would love to be a part. Maalouf is a true artist for me! As for Mark Eliyahu, I can say he is very authentic. What impresses me the most about him is that he makes his own music without the desire to please others… So, thank you for your thoughts, I greatly admire both musicians. I also understand how you made the connection because I feel more liberated with a sound closer to Maalouf’s and also a kinship with Mark in the way that I would never do a commissioned work either.

What would you like to say about your new single “IMP”?

I want to say “My dearest IMP!” (His eyes shine.) It definitely has a different style and I really found myself in it. So, I am not interested in who it appeals to at all. My dearest IMP!

My dearest IMP… So what would say to musicians on this path and your listener?

Don’t do any job that doesn’t sparkle your eyes as you talk about it! I still want to run to the venue every concert morning. I set off with great excitement to go to the airport. Carve yourself a path that will make you feel like this. And as I always say, let’s play together on the greatest stages of the world!

Thank you very much for this heartfelt interview.

I had great fun, thank you …